The other day I was reading a bird book and I came across a picture of a bird called a Sickle-billed Vanga.  Native to Madagascar, this bird is a pearly white color, with black wingbars and a short, deeply curved bill.  “Wow,” I said, “What a cool bird.”

So, is that an easy question?  Are some birds truly ‘cooler’ than others?  For someone who knows nothing about birds the obvious answer is yes.  If they compared a Scarlet Macaw to a female House Sparrow, it’s pretty likely they would say the Macaw is much cooler.  This bird is big, patterned with striking reds and electric blue, and heck- it can even be trained to talk! But, what would happen if this bird was thrown into an urban habitat where buildings replaced trees and trash replaced real, natural food?  The Macaw would likely die.  But the House Sparrow is an urban specialist.  It can adapt quickly and  flawlessly, a skill that has made this species one of the most abundant in America- and the entire world.  Even though this notorious little European invader may be annoying and drab, it can do things the Macaw could never hope to do, which makes it a pretty cool species.  The same goes for many other birds, even in the same family.  You could say a Pintail is cooler than a Gadwall- they have a very similar lifestyle as they’re both Dabbling Ducks- but a Pintail’s colors are much more bold and striking.  But a Gadwall is still an amazing creature, doing things other birds could never do, which I think makes it an awesome bird.

And then there’s rarities.  Most people would shrug off a Yellow-rumped Warbler here, but in Britain it would have birders flocking from all over the country, gasping as the bird came into view, marveling at how far the little warbler must have traveled to get there.  They obviously think the bird is extremely cool.  And it is!  We pay far more much attention to drab rarities than drab birds that we see everyday, something that I totally understand (I love rarity chasing, no matter what the bird), but on the inside the birds are almost the same, whether they be a Roseate Tern and a Rock Pigeon, or a Snowy Owl and a Song Sparrow.  Of course, some may be more colorful and rarer, but they’re all birds, and birds are one of the “coolest” class of living things our planet has ever seen or ever will see.  It’s why millions of Americans have become bird watchers and have devoted themselves to finding and protecting birds .  Here are many “cool” birds: 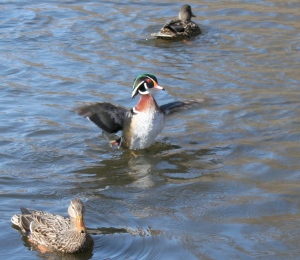 Wood Ducks look nearly as colorful as Lorikeets, but they can survive much colder temperatures. 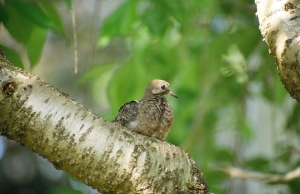 ... but could never survive the conditions this immature Mourning Dove will have to face.

So, it’s safe to say one bird cannot be “cooler” than another.  They can be more colorful and rarer, but on the inside they are all birds. It is also safe to say, however, that all birds are awesome!