Yesterday, 9/10, I ventured over to Milford Point with my dad and brother to see if we could pick up the American Avocet that had been hanging around.  Milford Pt. could be described as the “patagonia rest stop” of the past few weeks, as new rare birds have been continuously found there, drawing more birders who have then picked up more unusual birds.  Gull-billed Tern, Black-necked Stilt, Brown Pelican, and many other birds have shown here recently.  This particular bird, a non-breeding American Avocet, has been hanging around for a while.  I had never seen an Avocet in CT before ( I had seen them out in Utah), so I was very hopeful.

Upon arrival the tide was going out, and a scan from the marsh observation tower only turned up a few Yellow-crowned Night Heron.

We then went out to the beach side, where some extensive mudflats and sandbars were starting to emerge.  Tons of Shorebirds were around, all regulars.  Following some tip offs from some other birders, my dad soon spotted the Avocet on the tip of one of the closer sandbars.  We had great looks of the American Avocet for a short while, because soon a Peregrine Falcon shot in from the marsh, and made a swoop into the shorebird flock, scattering them.  the Avocet took off, and though wasn’t killed, we couldn’t relocate it.  Still a really cool sighting!

Comparison with a breeding bird (Bear River MBR, Utah) Note the salmon colored head and neck, while non-breeders have a plain gray.

During our time trying to relocate it, we ran into hundreds of more shorebirds, including 6 Red Knots.

On our way back across the flats, I spotted an unusual looking shorebird fly in and land.  Taking the scope, I relocated the bird, and  gasped.  It was a Buff-breasted Sandpiper, one of my nemesis birds!  This wasn’t the preferred habitat for one of these birds, so I was completely caught off guard!  The bird gave amazing looks, walking close to us, bathing in puddles, and even allowing my dad to get some nice sketches of him.  What an amazing bird, and a great way to end a great birding session in Milford!  Photos Below: 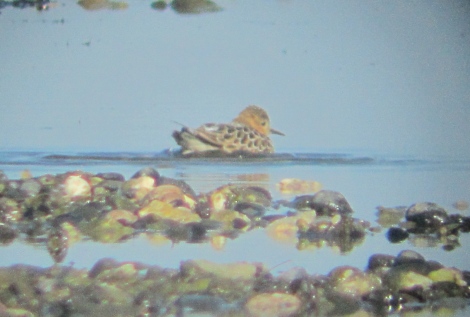 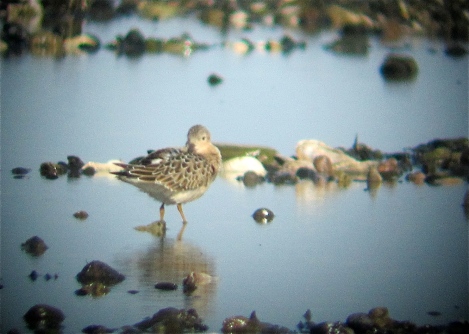