Today young birders Alex Burdo, Zach Smart, and I, along with my dad and Fabian Rosing, a German young birder who is an exchange student here, ventured to Wallingford for 2 unusual geese in CT- Greater white-fronted and Cackling geese.

We started at Mckenzie Resevoir, where the Greater-white Fronted had been seen the last few weeks.  Although no goose was to be seen, we found 3 noyable species:  6 American Coots, 2 Pied-billed Grebe, 1 Ruddy Duck, plus a nice male Green-winged Teal.  Driving along the resevoir a bit further did not turn up anything new.

We then decided to move up into the fields along Whirlwind road, where there were large flocks of geese gathered.  On the first field viewing was limited, but the Canada Geese we did see were not holding any surprises. The view of the fall colors was very impressive, though.  Farther down the road we came to a field filled with cows, but beyond them there was a patch of field behind a stone wall that was filled with geese.  We all began scanning them for any goodies.  I spotted a strange hybrid goose, with a head fading to all white and orange legs- most likely a Canada/farm goose hybrid.  Then Alex spotted a Cackling Goose, which got us all excited.  This first individual was a hutchinsii, displaying the small size and shorter neck and bill. 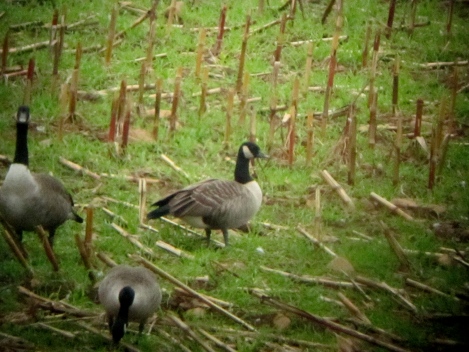 We spent a while watching this individual, but soon Alex spotted another Cackling.  This one was different.  I got a few photos, but they are all crummy.  See what you think…

Although this was never confirmed, and the photos don’t show much, we thought this bird a candidate for a minima Cackling.  Look at the proportions- the neck is stubby, and the bill is much shorter than the hutchinsii.  Also look at the width of the white band on the face and how much space it takes up on that small little head.  Also look at the small white band along the base of its neck, which is also a field mark for the Aleutian Cackling leucoparenia.  But this could also just be a Richardson’s Hutchsonii, because the breast is still light and the collar fits for Richardson’s too.  So, a mystery.

We moved on to another lake farther down the road, where the woods were dripping with Yellow-rumped Warblers and both Ruby-crowned and Golden-crowned Kinglets.  The lake itself was full of Ruddy Ducks.  I think the final count was almost 80 of them.

After that we bade farewell to Fabian and his host family and moved on to Portland to search for the White-faced Ibis, a bird I had never seen in CT.  We arrived at the spot and flushed a few Eastern Bluebirds.  In the parking lot, a group of American Pipits flew over.  But no Ibis.  We sloshed through a length of muddy road, but no Ibis could be seen.  As a small consolation, we flushed a handful of Wilson’s Snipe which was good to see.  Hunting Season just opened, and we found some shotgun shells in the mud.  I really hope they didn’t run into the Ibis…

Again, another really great day with the CTYBC!