April is not known as the best time for birding on Cape Cod, and it definitely was slower than other times I’ve been there.  However, this is Cape Cod, which means there are always great birds around.  I’ll go through the trip day by day.

We arrived on the Cape around 6:00 PM and immediately went to go look for the reported Yellow-legged gull in Hyannis.  When we arrived not many people were there, a bad sign, but we did run into fellow CT birder Nick Bonomo.  He had seen the gull 2 hours earlier, but it did not return in the time we were there, so we decided to try back another time.  In the area there were some other good birds, though.  A Barn Swallow passed through, and we saw a Laughing Gull, the earliest I’d ever seen one in New England.  I didn’t realize we’d be seeing many during the course of the trip!  There were really strong winds blowing, and sand constantly was blowing in our faces, so conditions were tough.  We were looking forward to some sun the next day. 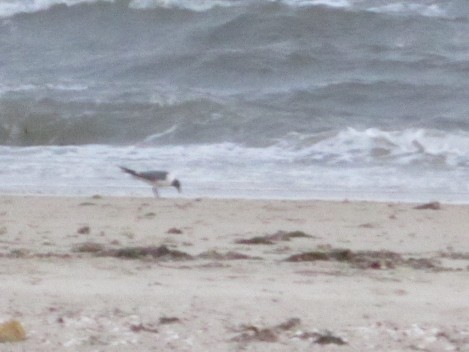 A horrible picture of a Laughing Gull

We started the day in Chatham.  We headed out over to South beach, which is a massive spit of sand.  In the water were Common Eider, Red-breasted Mergansers, Surf Scoters, and Gray Seals.  As we walked we went farther out into the ocean on the sandbar, and we began seeing one of the most amazing Northern Gannet passages I had ever witnessed.  The Sulids came feet from the breakers, and in impressive numbers- I’d estimate about 100 individual birds flew by.

Can you see the Gannet? It blends in with the Whitecaps.

Soon the rising tide cut us off and we had to head back.  A flock of 10 Greater Yellowlegs flew over from on of the pools, and we found a really cool thing- the carcass of a Common Murre washed up on the sand. 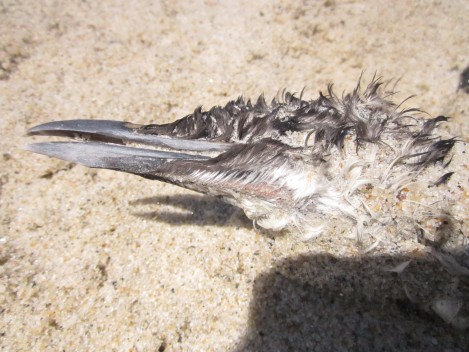 The head of a dead Common Murre

We then spent some time exploring the beaches and coves of Chatham and Orleans, of which there are many.

Our next stop was the Birders General Store in Orleans which is by far my favorite store in the entire world.  They have EVERYTHING bird related.  I bought the Crossely ID Guide, which I really enjoy.

Next was the Cape Cod Natural History Museum in Brewster, which has really nice grounds that go out to a wide network of dunes.  Unfortunately, the combination of a big rainstorm on friday night and the spring tides had flooded the area, and we couldn’t access the shoreline.  We did hike the marshes and meadows though, where there were loads of Osprey and Tree Swallows.

Osprey on their nest in Brewster

To end the day we spent some time on the other Brewster Beaches, where there was not much bird activity but some beautiful scenery. 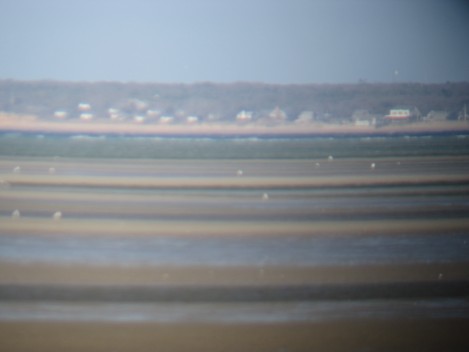 Definitely the best day of the trip (though this was the day the Yellow-legged Gull dissapeared.  ARRRRR…..).  Anyway, we started the day at the Wellfleet Audubon Preserve, which is one of the best birding spots on the Cape.  The feeders were hopping, as usual, though nothing really unusual was around.  A single Field Sparrow was the only relief from  the normal feeder birds.  As we walked the grounds we found that, just like Brewster, the shoreline wasn’t accessible because of high flood waters. 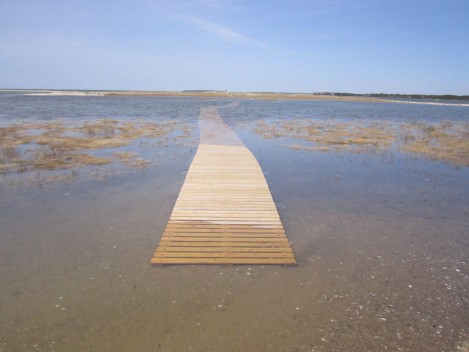 So, we spent most of our time on the Marshes.  About 20 Greater Yellowlegs were hunting in the Grasses, and with the scope we picked out a Wilson’s Snipe in the Grass. 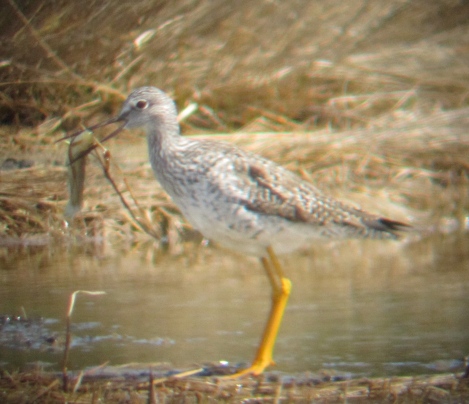 A Greater Yellowlegs snaps up a fish.

Suddenly we heard a call from the trees.  Fitz-beww. Fitz-beww….  Willow Flycatcher!  And a very early one!  I searched and found it singing up in a tree.  Very unusual- these guys usuallly don’t start turning up until may, so this was a rare early bird.

Soon we left and headed up to Provinctown for a Whale Watch.  These trips, which usually head out to Stellwagen Bank, can be very productive for both birds and Sea Mammals. I had never been on one this time of year, and this is the time a very rare animal passes through the area- Northern Right Whale.  As we headed out of the Harbor many Common Eiders and Double-crested Cormorants swam beside us, and we saw our first sea mammals of the ride, in the form of 2 Atlantic white-sided Dolphin.   We left the harbor and soon were surrounded by Northern Gannets.

We were hardly outside the harbor when a shout went up.  A whale has surfaced…. and it was a Northern Right Whale!   Just incredible…. but we saw many that day.  They are ID’d by the V shaped spout, the finless back, and the white barnacles attached to their head.  This was the rarest animal I’d ever seen in my life (in the wild).  There are only 350 – 400 individuals left in the wild, and we saw perhaps 5 percent of the entire population!  That, to me, is incredibly sad.  It means these majestic animals are close to extinction.  As we continued on the majority of whales were rights, but we also saw a Fin Whale, the second largest animal on the planet!

An Atlantic White-sided Dolphin swims beside the boat.

Birdwise, most were Gannets, but we did see a flock of Harlequin Ducks and a single Razorbill.

On our way back to the harbor we saw an incredible sight- a breaching male right whale!  It was so cool to see the whale throw it’s entire body into the air, perhaps only 300 yards from the beach!  We spent some time with the individual and then went into port, where my dad and I noted a couple of  ‘white-winged’ gulls on the sandbar at the extreme end of the Cape, which we never firmly identified.  Overall a great day.

My dad needed to be in Hyannis by 3:00 to catch a bus home, so we spent the day in the area and decided to try again for the YL Gull.  On the water off of Barnstable were Black Scoter, White-winged Scoter, Surf Scoter, Long-tailed Duck, Red-throated Loon, Common Loon, and Horned Grebe, the latter two in breeding plumage.  We spent a lot of time on the Barnstable beaches and then went for the Gull.  It wasn’t around, and in talking to a few other birders, we learned that the bird had not been seen for two days, and had probably left for good.  There were American Oystercatchers and Piping Plovers on the Beach and Bonaparte’s Gulls on the water, though, which made it a worthwhile stop.  As for the gull, it was probably a hybrid Herring x Lesser Black-backed anyway… 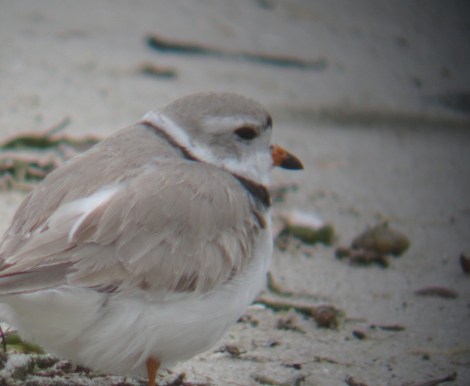 A Piping Plover in Hyannis

It was our last day, and my dad had left the night before, making it just my Mom, brother, and me.  My Mom and brother aren’t birders, but enjoy the outdoors, so I managed to squeeze some birding in at some local stops in Harwich.  At Bank Street Bogs there were Yellow-Rumped Warblers, Tree Swallows, and Eastern Bluebirds. 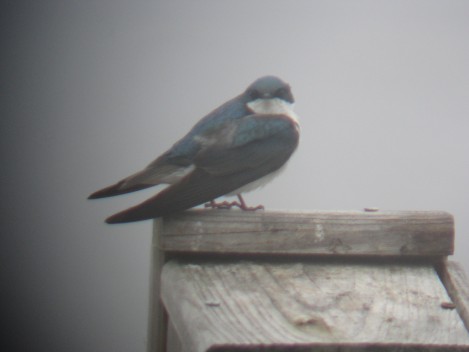 At Bells Neck, also in Harwich, there were a few Pine Warblers, more Butterbutts, (yellow-rumps) , and impressive DC Cormorant numbers- they blanketed the river!  These numbers are being mirrored in CT, with reports of thousands gathering in certain spots.  We then went back to our cottage to prepare for leaving the next morning.  Overall, it was a great trip, and though spring comes late on the Cape, Migration was still definitely underway!

2 responses to “April on the Cape”